JDM Public Strategies, LLC was founded by John McMickle who currently serves as President of the firm. From 1995-2001, John McMickle was a Counsel to the Senate Judiciary Committee. After leaving the Hill, John McMickle served for several years as a partner in the government affairs department of a major international law firm. Mr. McMickle received a B.A. from the University of Tennessee in 1989 and a J.D. from American University, Washington College of Law in 1994. 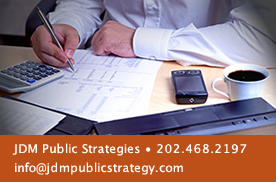